In the middle and late Twenties (spurred by better bridges over the Humber River on Dundas and Bloor Streets, and an expanding Toronto population) home building west of the Humber began in earnest. Hundreds of new families moved in and of course these included many Masons from widespread jurisdictions. 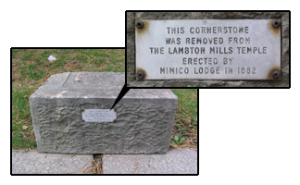 The late Brother Erfort E. Bradley of Parkdale Lodge residing in the Kingsway area was responsible for calling a meeting at his residence on Thursday January 25,1934, with the idea of forming a new lodge to be made up of those Masons if there were adequate interest, and with the thought that it be named “Kingsway Lodge”. At that time the “Kingsway” boundaries (as well as the subsequent jurisdiction of Kingsway Lodge) were considered to be Dundas Street on the north, Humber River on the east, Bloor Street on the south and Royal York Road on the west.
The original meeting was attended by local masons, namely W. Bro. Donald J. Gunn, W.M. of Temple Lodge, W. Bro. W.J. Townsend, W.M. of Cathedral Lodge in 1930, and Bro. George J. Bartholomew of Woodstock Lodge (Cape Colony). Subsequently the committee was to include R.W. Bro. Gordon J. Jack, P.D.D.G.M. and W. Bro. Archie Murdoch, W.M. of Canada Lodge, Toronto, in 1934. 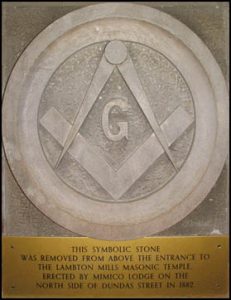 At the next meeting held at Bro. Bradley’s home on Sunday, February 11, 1934, R.W. Bro. Gordon Jack having signed the prepared Charter Roll, he and W. Bro. Donald Gunn approached R.W. Bro. Bull, W.M. of Mimico Lodge in 1901 to enlist his interest and to approach R.W. Bro. A. J. Anderson, the D.G.M. who, upon learning of this venture remarked “not to discourage the object in view”. With this encouragement the committee immediately set out to locate interested Masons in the area and were able to secure signatures of 62 Charter Member Applicants.

On Tuesday January 8,1935 a committee of Charter Members met with the Officers of Mimico Lodge at their Lambton Mills Temple located on the north side of Dundas Street between Prince Edward Drive and Royal York Road, and built by them in 1882. They welcomed the idea of having a new lodge share the use of their Temple. This Temple was to become the home of Kingsway Lodge for many years to come, actually until the new Etobicoke Temple was occupied in 1966.

In lieu of a portion of our rent in Mimico Temple, we undertook to re-carpet the Lodge room. A carpet of Masonic design was ordered from England, which unfortunately never reached the Temple as it was on the S.S. Athenia when it was lost by enemy action during the war. A regular blue carpet of domestic production was subsequently purchased and installed by us. At a later date Kingsway Lodge redecorated the banquet room of the Temple.

A carpet of Masonic design was ordered from England, which unfortunately never reached the Temple as it was on the S.S. Athenia when it was lost by enemy action during the war.

The mosaic pavement (now in Etobicoke Temple) was designed by the late W. Bro. Albert Flood, W.M. in 1945, who also supervised the laying of it in the Lambton Mills Temple. Each of the first slate of officers donated the collar of his office and each name was engraved on the reverse side of the medallion concerned. The late Bro. George McCrea donated the V.S.L. and other items of the Lodge furniture have since been donated by members. The late Bro. George McCrea also originated the practice of personally donating and presenting a copy of the V.S.L. to each Initiate. Currently the cost is being absorbed by the Lodge and the practice is continuing.

Gavels used by the W.M., the S.W., and the J.W. are of a similar unique and upright design. The W.M. gavel is formed hollow and contains a parchment scroll which each succeeding Master has signed. On installation, each Master is presented with his own personal and suitably inscribed replica of the Master’s gavel.

On Monday April 15, 1935, the first regular meeting of Kingsway Lodge was held “under dispensation” and the officers for 1935 were as follows:

Bro. Bradley lived to see the Lodge formed, but illness prevented him from occupying the office of J.W. A suitable memorial service was held for Bro. Bradley on October 28th,1935, when the Lodge was consecrated. On that date the late Most Worshipful Bro. A. J. Anderson, Grand Master, conducted the ceremony of constitution and consecration of Kingsway Lodge in Mimico Temple. Following the meeting the members adjourned to St. George’s On The Hill (Anglican Church) for a banquet with timed honored toasts to suit the occasion. At the first regular meeting six applications for affiliation were received including one from our esteemed treasurer of many years standing, V.W. Bro. Jack McCloskey, W.M. 1951. The by-laws adopted were prepared by a committee consisting of V.W. Bro. Sam Nicholls, Most W. Bro. Donald Gunn and V.W. Bro. Archie Murdoch who drew heavily on those of their respective mother lodges.

W. Bro. McHenry was installed as W.M. of Kingsway Lodge in 1936. Having previously served the Craft as Master, he was well versed in the Arts and Sciences of our Order and was a perfectionist. In kindly but firm manner he instructed the officers on the correct posture in their respective offices, the proper method of saluting and requested them not only to know their duties well, but to learn each year the duties of a higher office in the event that they were elected to that office. From that time forward careful attention was given to selecting the most junior officer annually, having in mind that one day he would probably occupy the Chair of King Solomon.

At the same time the policy was established that Kingsway would always have a practice session in the Lodge room prior to conferring a degree. The procedure was established that no printed matter was allowed (in the Lodge room) except in the hands of the prompter, at those practices. The policy was also developed of encouraging “official” visits to other Lodges on the part of the officers. This permitted the observation of how other Lodges did their work so that we might benefit from the example of their outstanding work and avoid problems resulting in poor or careless performance. Thus a tradition of practical perfection in the Ceremony of the Degree was developed which has continued down through the years. 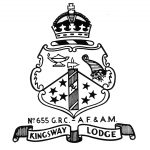 The brethren responsible for our crest, V. W. Bro. George Bartholomew, V. W. Bro. Archie Murdoch and Bro. Erfort Bradley and possibly other members of the organizing committee who have long passed to the Grand Lodge Above, to the best of my knowledge left no material relative to this subject. As a member of the organizing committee the late W. Bro. Arthur Reid and myself were assigned to recruit members of other lodges now living in the Kingsway area to join this new Lodge, and I cannot recall any discussion of the crest. The late M.W. Bro. Donald Gunn and V.W. Bro. Sam Nicholls have been unable to recall anything in connection with this crest. Grand Lodge disposes of Lodge records over 20 years old, so the only reference to the formation of the Lodge would be found in the annual report of the Grand Lodge communication of 1935.

The selection of a crest is left to the decision of the organizing committee. It ois also the seal of the Lodge and an impression of the seal must be filed with Grand Lodge. It appears that our first summons which would indicate it had been approved by both Grand Lodge and the members at that time. The only other avenue open for finding the reason for the design of the crest, the implications or meaning of the characters on the crest was through the recordsat the Masonic Library at the Yonge Street Temple. Fortunately, I was able to discuss this subject with the librarian and very learned brethren of the Craft who happened to be in the library at the time of my visit.

The Crown – The crown stands for loyalty and could have meant loyalty to King and Country or to our Lodge to all brother Masons.

Lamp of Light or Knowledge – It is a reminder, as masons, in our beliefs contained in the volume of the Sacred Law- to live and act accordingly- that the light of Masonry might become known to our fellow beings.

Horn of Plenty or Cornucopia – It is the jewel of the Stewards office. An old pagan myth tells us that Zeus was nourished during his infancy in Crete by the daughter of Melissus, with the milk of the goat Amathea. The Stewards being responsible for the tables being properly furnished at the refreshment hour.

The Faces – Represent the authority of the Worshipful Master of the Lodge. It is a bundle of rods having among them the ax with a blade projecting at the top, and was borne by Roman Magistrates as a badge of authority. Note the Square and Compasses in the centre of the Faces.

The Seven Stars – Allude to a perfect Lodge consisting of the Worshipful Master, his two Wardens, two Fellowcrafts and two Entered Apprentices.

Compass Open at 60 Degree Angle – The explanation may be found in the fact that equilateral triangle has always been sacred. Now equilateral means “all sides equal”, so I imagine the Square and Compasses were included in our crest to teach the brethren to live on the square and accept all brethren as equal.